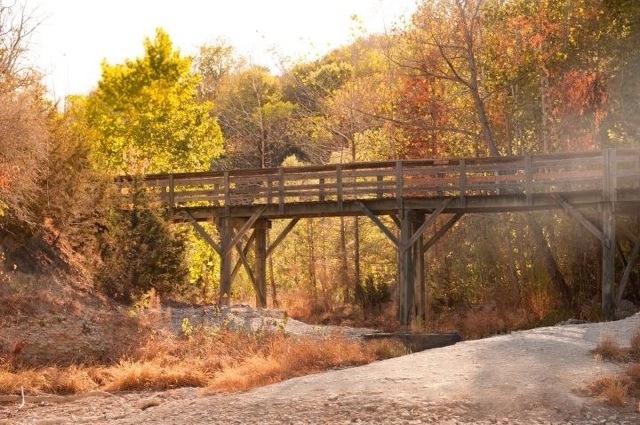 The photo above taken by my daughter, Kelli, who is a wonderful photographer, is the true inspiration behind this story. Her website is here

She lives in southern Texas, and the real name of this walking bridge is The Chalk Ridge Falls Walking Bridge near Salado, Texas close to Austin, where she resides. I have linked a website when I was researching. You can see more of the web photos and read more about the real Chalk Ridge Falls Park here

When Kelli showed me the above picture she had taken in the fall with the beautiful foliage changing, I was unusually captivated by it. The photo is undeniably gorgeous, but after I received a 16×26 canvas print of this in the mail, I could not help my eyes drifting back to it, almost eerily, over and over at odd times during the day. It was pulling me. The images, people and words began to take root in my brain. It lured and seduced me, whispering nostalgia.The story began emerging inside of me like a slow bubbling gravy, thick and flavorful.

I began writing. And as I wrote, I became hopelessly lost in another time, another era where the world was a simpler time. It was a time when telephones still had cords, computers were big clumsy things that only the government used; when dishwashers, if you were lucky to have one, it hooked up with a hose to the kitchen faucet; when clothes were still hung on a clothesline to dry; when getting a burger,fries, and a shake was a treat you got to have only once in a while; when children had bicycles and where outdoors was the only exciting place growing up; kids jumped ropes, hula-hooped, skimmed rocks, and the yelling of “come in for supper” was repeated several times by mothers.

It was also a time of war and political unrest; peace-loving uninhibited hippies shouting “make peace not war” and “power to the people”; riots and radical racism ran rampant; economic, social, and religious discrimination was thriving in large cities and small towns alike; we put a man on the moon; oil and gas industry had already boomed and big business was growing. In the heartland fields of corn, wheat, or cotton would begin rubbing shoulders with fields of slow pumping oil derricks, pump houses, and tank dikes.

It is from this era three unlikely girls will become friends. One girl is one half Native American and one half Hispanic and adopted into a white family; one girl is white, somewhat spoiled, coming from oil money, but remains compassionate despite a prejudiced family; and one is a high functioning autistic, who is the love child of  a white free-spirited flower child and helped being raised by a loving African-American step-daddy. This coming of age story is about finding and holding on to real friendship, in spite of societies obstacles. It’s about discovering the town secrets surrounding the mysterious old walking bridge hidden deep in the dense woods of a closed state park, shut down for decades. It’s here, discovering the truth of the walking bridge, they seek refuge, ask questions about life, and find friendship. They grow up, deal with boys and suffer the peer pressures of being just a little different, with a little help from magic realism.

4 thoughts on “The Inspiration behind my story… The Walking Bridge”

This site uses Akismet to reduce spam. Learn how your comment data is processed.