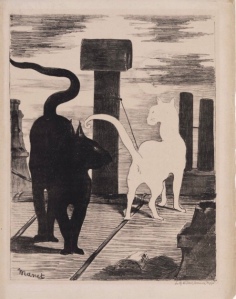 “Mornin, Sarge.” Rascal’s voice was tight. I could tell he felt things were still a little reserved between us after last week. He sauntered to me from behind, then stopped to scratch an ear nervously with a back paw.

“Rascal,” I purred, nodding my greeting. The sun bounced off his solid white coat, blinding me a minute. I had to look away. But, hoping to put him at ease, I added, “Just another day in Paradise.”

“Yes, sir.” He assumed the watch position beside me at the roof’s edge.

I walked away, yawned wide, and stretched the long night shift away by reaching far with my front paws, belly touching the roof, and my butt high in the air. My solid black fur absorbed the early heat quickly and I was feeling the need for a nap.

I kept a watch on the kid’s tail. It flicked back and forth in anxious anticipation, so I moved to stay clear of it. Rascal was as white as I was black. And our personalities were just as opposite.

All in all, he was an okay kid, I guess — for a short white-haired — and for being the new cat on the block. Instincts told me he was gonna make a pretty damn good catective one day, too. That is, if the loose cannon can be trained out of him. He cost us a conviction last week. But hey, everyone makes mistakes. God knows I did. Live and learn, I say.

Oh sure, he’s a little wiry and twitchy, but in this business that was a good thing, right? Land well on all fours and all that. And, I know first hand what a few years on Rat Patrol will do to ya. It wasn’t that long ago I was on the Alley Beat. I couldn’t sleep for hours even after falling into bed dead tired.

I know for a fact that if I had his past I’d be more than a little messed up. His file said he came from a broken home; was kicked and abused; couldn’t take the new dog; ran away at a young age and had to scrounge food from dumpster to dumpster. Drank from the roof gutters, too. That kinda life will make you do one of two things: call life quits, or get tough and fight for it.

Me? I was lucky. Had a good coddled life with an old maid librarian. She died when I was young and, well, the shelter was good to me. Got me into the Academy. Guess I was pretty good as I was offered a position on the special ops unit S.C.A.T. Team.

That was ten years ago, and I had loved every minute of it; the excitement, the adrenaline rush, the whole nine yards. That is, until the day I nearly met my maker after Operation SCRAM went awry. That was one nasty takedown and we lost five tough felines that night. I literally saw the Rainbow Bridge on that operating table. But, here I am. Livin’ the dream. An old gumshoe with a slight limp.

Been a catective for the last four years and just counting my days until eligible for early retirement. I sure look forward to sleepin’ all day on a soft pad, gettin’ fat and sassy, and havin’ bowlfuls right a my clawtips. Now that‘s my idea of Paradise.

The department takes care of it’s own, too, and is nothing if not thorough. Placement for retirees to a good home was ninety-eight percent, so that’s a huge incentive for early retirement.

“Today’s the day, Ras. Has to be,” I said, shaking my head, “We’re working against time with those newborns.” We both gazed into the window on the fifth floor.

“Day two and still nothing in the bowls from that stinkin’ no-good human,” Ras said, flexing claws. “And who suffers? That poor single mama trying to feed four kittens, that’s who.”

I remained silent and moved back. Ras was getting riled up. He began pacing in agitation.

“I see that human scumbag passed out on the sofa again,” he continued with barely concealed anger. “It’s gonna be a real pleasure to book his ass today. But not before I get a well-aimed five-claw handshake in him!” He half-laughed, half-mewled as drool splat on the flat roof. It almost hit my tail.

“Sit down, Ras. Don’t get so worked up. We’re all ready to nail this wise guy. He’s a repeat offender. Now just … take it easy. I’m gonna head home and catch an hour or two of shuteye. Let me know if there’s any change in the situation.” I glanced one more time in the direction of the window. “If I don’t hear from you by noon, I’ll call back-up and we’ll make our move.”

I coughed and took this opportunity to clear the air between us. “Rascal, this jerkwad’s gonna be put away for a long time — if, we play our cards right today. You get my drift?” I looked pointedly at him. It was a three-month long case and that perp last week was going to walk on a technicality because of Ras and I wasn’t about to let that happen again.

Rascal nodded and looked down at his paws. “Listen, Sarge … I been meaning to talk to you about last week. Won’t happen again. I swear ta God. I want this POS bad, and I’ll do whatever it takes.”

I nodded back at him, spreading my claws wide. I licked my pawpads, watching him behind half-closed eyelids. I measured him up, satisfied, and I knew I didn’t need to tell him to stay alert in the warm sun today. But, I had noticed his intense and watchful eye regarding the victims beyond that window the past two days.

I hadn’t said anything to him or the captain, but I knew this case was special to Ras, that he was more that a little attentive by offering double shifts. He had a personal stake in this.

He knew that poor dame and my suspicions were confirmed today in the morning light. Two of those four in the litter were solid white.

“Trust me.” I put a paw on his shoulder. “We’re gonna get this guy, Ras, don’t you worry. He’s got a rap sheet as long as my tail, and he’ll get the key thrown away. Mark my words.”

Ras nodded and I could see emotion filling his eyes. He looked away and I turned quickly so as not to embarrass him by seeing him swipe roughly at his eyes.

I made my way down to the street slowly. Damn stiff joints. I may not move as fast as I used to, but that’s just okay. ‘Cause I know I’ve had it easy, better than most in these crummy lives we’re given.

I hope you enjoyed this silly, fun flash fiction piece. I wrote it for a group called #WordingWednesdays on MeWe using the picture prompt above. I’ll tag #SaturdayScenes on Google plus too.

This site uses Akismet to reduce spam. Learn how your comment data is processed.